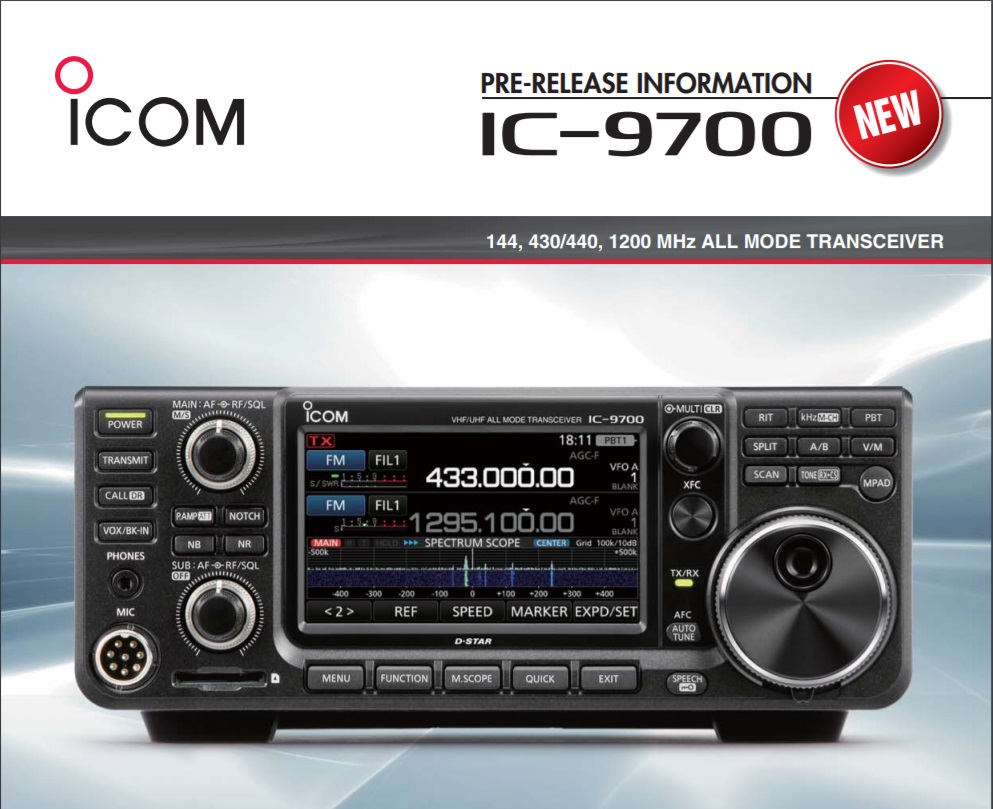 The IC-9700 is the first VHF/UHF transceiver introducing the RF direct sampling system for the 144 and 430 MHz bands, a real-time spectrum scope and waterfall function. The RF direct sampling system has achieved a high evaluation in Icom’s IC-7610 and IC-7300 HF transceivers, and the spectrum scope and water fall function have been indispensable tools to increase QSO opportunities, without missing weak signals. The radio has various features, such as a built-in 1200 MHz band, 4.3 inch TFT color touch screen display, full duplex with Dualwatch on separate bands, Satellite mode, D-STAR DV (Digital Voice) /DD (Digital Data) modes and Terminal/Access point modes. In addition, a newly designed power amplifier and cooling system provides stable and high-efficiency operation, even when continuously transmitting for a long time.

The IC-9700 is the perfect side-by-side companion to the IC-7300 HF radio. They are the same size and have almost identical ergonomics. Using the IC-9700 and IC-7300 creates an ideal, compact radio station covering the HF, 144, 430 and 1200 MHz bands. The IC-9700 is the one and only VHF/UHF all mode transceiver that enables a variety of VHF/UHF operation, like DX, contests, satellite/EME and D-STAR.

The IC-9700 is an RF direct sampling method (144/430 MHz band) which has been highly evaluated by HF transceiver IC-7610 / IC-7300, real-time spectrum scope which can grasp the situation in the band at a glance, We adopted the waterfall indication that can be confirmed by the series for the first time as a VHF / UHF amateur radio. In addition, 1200 MHz band is standard equipment.

Since the operation system and user interface inherit the equivalent of the IC – 7300, by aligning IC – 9700 and IC – 7300, it is possible to operate from HF to the 1200 MHz band in lineup. IC-9700 with innovative spec and sophisticated operability unique to V / UHF dedicated machine. DX, contest, satellite / EME communication, 1200MHz band, D-STAR ® , such as the world of V / UHF, broadly, is the industry’s one and only all mode transceiver commitment pulled to the VHF / UHF, which can be enjoyed deeply.